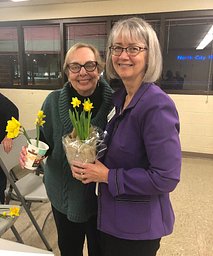 - Garden Walk at gardens south of Pratt in West Ridge

September - Greenhouses, Golf and Gardens: the Story of Warren Park and West Ridge, Dona Vitale, member of the Board of Directors and Outreach Chair for Rogers Park West Ridge Historical Society

- A Tour of Emily Oaks Park in Skokie

August - West Ridge Nature Center Presentation by Gary Morrisey;  Visit to the Back of the Yards Neighborhood: Lunch at Roland Kulla's Studio and The Plant

March - Plant Considerations for the Landscape with Kim Kaulas

August - NGS Picnic in the Park; A Visit to the Prospect heights Slough

November - Putting Your garden to Bed with Ann McIntee

February - Daffodils: The Stars of the Spring garden with Sue groshong

March to August - No activities or programs due to Covid-19

November - Birds of Illinois via Zoom with Matt Igleski

March - Travels in the Pantanel with Patricia Weiner

May - Proven Winners with Sandra Wentworth and Spring Plant Sale

June- A Visit to the Prospect Heights Slough

August - Visit to the Back of the Yards Neighborhood: Lunch at Roland Kulla's Studio and The Plant

November - The Monarch and its Migration with Doug Taron

Past Programs and Activities

Throughout the year we plan educational programs, field trips and social events as well as host fund-raising events such as our Plant Sale and Garden Walk. Our fund-raising supports our Community Service projects.